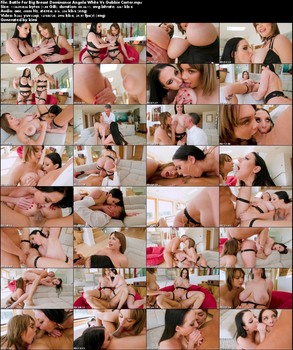 Superstar Duo Angela White & Gabbie Carter Are a Top Heavy Tag Team That Won’t Stop Until They Get All The Cum! The girls are wearing matching black lingerie outfits with rose gold accents as they jiggle their juggs for the camera and discus the devious acts they’d like to do today. Angela turns her attention to Gabbie’s massive mammaries and slips her nipples out between the cuts of her bra so she can pinch, slap, and suck on them. She pulls out her huge tits and Gabbie gets right to work sucking and rubbing them together before both ladies back up and put both pairs of tits on full display. It’s big boob heaven when they take off their tops and get on the couch to let those juggs hang au natural until Angela wants a taste of Gabbie’s young pussy. Gabbie lays on the couch and hold her pretty pussy lips open as Angela’s talented tongue makes its way over to lick and suck on Gabbie’s pulsating clit. Michael Stefano makes his way over to join our buxom babes as he and Angela feed on Gabbie’s fun bag before being surrounded by both girls’ racks. His face disappears beneath the mountainous boobs of our beautiful babes until Michael stands up and pulls out his cock for Angela & Gabbie to suck on. Angela takes it deep down her throat then Gabbie wraps her young, perky lips around that huge cock so Angela can work the balls. Having an opportunity not many men will have in their lifetime, Michael slides his dick into Angela’s cleavage as she wraps her soft flesh around it to make his titty-fucking dream come true. If that weren’t enough, he turns his attention to Gabbie’s rack and gets a boobjob from her too before our luscious ladies lay him on the couch to have their way with him. Angela sits on his face while Gabbie continues the titty-fucking, stopping here and there to suck Michael’s cock so it’s well lubed. Gabbie can’t resist anymore and climbs on top to ride Michael’s dick as Angela rides his mouth. Gabbie grinds her pussy on that cock while Angela makes her way around back to lick her asshole then pull that dick out and clean it before shoving it back inside Gabbie’s gushing hole. Angela’s ready for a ride and hops on top of Michael’s cock and bounces her booty on his balls. Gabbie sucks on his sack and licks Angela’s asshole, playing the oral support role until it’s her turn to get dicked down some more. She lays on her back so Michael can drill Gabbie’s young pussy in missionary while Angela sucks on her tits and cleans off his cock whenever he pulls it out. Angela savors every sip of pussy juice she tastes off Michael’s dick before backing into doggy to let him hit it from behind. The ladies take turns riding that big cock in reverse cowgirl then give Michael a rimjob/ blowjob combo until he explodes with a fountain of cum all over their faces!

Jewelz Blu Is Bad, Beautiful And Down To Fuck

Brooklyn Chase Gets Caught Streaming A Sex Show On Cam