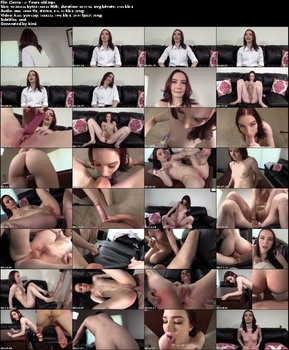 21 year old redheaded barista Cierra wandered into the office wearing a very smart outfit. Like she thought it was a real model casting, but little did she know… During her interview, she seemed a bit hesitant. Slowly, she warmed up and was soon naked and putting toys in her butt. We noticed she’s a talker, so we got her down on her knees and put her mouth to work in more constructive ways. When Cam moved his attention to her pussy he noticed that Aunt Flo had arrived…

He seized the opportunity and suggested that he could go ahead and pound her ass instead. She happily agreed. The following majority of the audition was Cierra getting her butthole pummeled, which she took like a good girl. This girl eagerly did everything asked of her and more. We had her gape, ATM, the whole kit’n kaboodle. For the pop shot, Cam finished in her mouth with such a fat load of jizz, she could hardly choke it all down. Finally, we let her know "The Producers" would pay her in about three weeks, then sent her on her way. Tell me I’m crazy, but doesn’t this girl remind you of another girl who "one time at band camp" put a flute in her pussy?