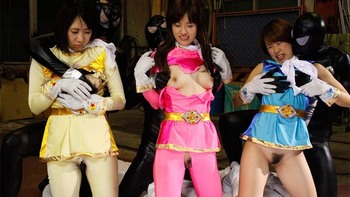 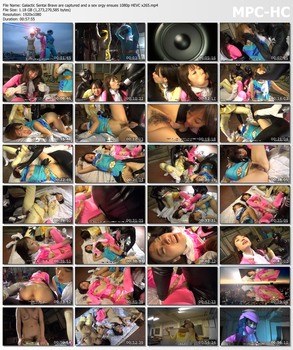 Galactic Sentai Brave series continues as the Sentai are attacked and captured. These beauties have been the saviours of the Imperial City of Japan. They have fought hard against the aliens and have used all their powers to destroy the invaders. But now these three brave fighters have been captured and they have been tied up and overpowered. Since the aliens know that these three brave ladies have cute titties they demand that their tits be exposed so all the alien team can see how sexy hot these girls are. Once out, the tits are touched and groped and it gives the alien team the confidence to pull their cocks out and have the team suck their dicks. This is the victory the alien team have been dreaming of. The cock sucking is wonderful and all the Galactic Sentai each take a cock in their mouth and suck good and hard. Then each one of the team is used as a cock holster for the alien cocks. Some of the team are forced to watch their teammate take some cock doggy style. Pink is forced to join in one fucking and she has her tongue out as she is going to be forced to lick the balls of the alien while he fucks blue. This capture becomes a group sex show as all their fucking activity is then broadcast live on flat screens all over the city. The aliens also get out there fuck machines and use them on the hot pussies the team has.

Bailey Base – The Secret Ritual

Blake Blossom – Getting Dirty In the Shower