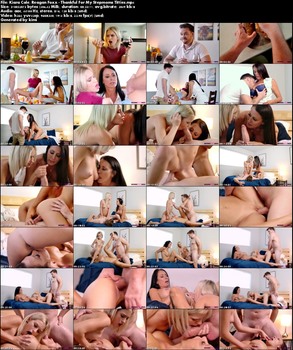 Thanksgiving isn’t a happy time for every family. For Reagan Foxx, her stepson Kyle Mason, and her adopted daughter Kiara Cole, it’s kind of a drag. The small family is having dessert, but Kyle is only picking at his pie and Kiara is on her phone. Reagan tries to lighten the mood by asking the kids what they are thankful for, but Kyle immediately comes back saying his stepmom’s tits. Kiara can’t believe Kyle would say something like that, but Reagan tries to keep the peace. Kyle then gets up and goes to get some cannoli, with the added prank that his dick is on the platter as one of the choices. Without looking, Kiara grabs it. She’s grossed out, but she will give as good as she gets, so she hops on the table and flashes her twat and asks Kyle what he wants next, her pussy?

Even as Reagan realizes that Kyle has gone way too far, Kyle is already sticking it into his adopted sis. Reagan knows she should stop them, but honestly, after seeing what her stepson is packing, she begins to wonder whether he was really serious about the titties comment earlier. Kiara notices that Reagan is touching her twat. She wouldn’t want to take that much pleasure without inviting her adopted mommy to join in. Kyle is game, too, and soon enough he makes good on his desire to suck them titties while Kiara sucks him off. They relocate to the bedroom for some good old fashioned family fun.

After giving Kyle a double BJ, the girls have him lay down so that Kiara can mount him and ride him in her tight little puss. Then Reagan gets on her back so Kyle can fuck his stepmomma and Kiara can ride Reagan’s face. On her hands and knees, Kiara enjoys a proper pussy pounding as she does some pussy eating of her own. Kiara’s tongue brings Reagan off, even as Kyle’s dick brings Kiara off. Scooting forward so that she’s got Kiara straddling her from above and Kyle’s cock in her mouth, Reagan works with Kiara to get Kyle off. He cums all over Reagan’s magnificent breasts, capping off what has suddenly become a much nicer Thanksgiving.

Krystal Kash – An Ordinary Day Until It’s Not